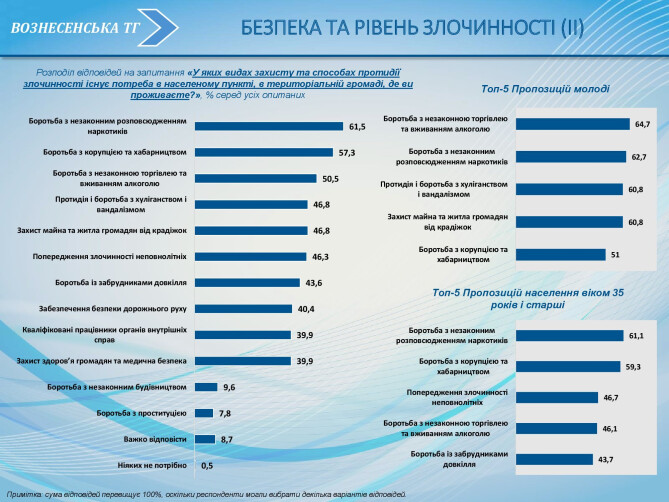 The level of security in the Ascension Territorial Community leaves much to be desired. This is evidenced by the results of a survey conducted in the community on security issues and finding ways to solve them. 218 respondents aged 14 to 70 took part in the survey (Fig. 1). Persons aged 30–39 (33.0%) and persons aged 60 and older (31.6%) participated the most in the survey. The vast majority of respondents are women (70.6%) (Fig. 2).

Fig. 3. Distribution of answers to the question "How safe do you feel in the settlement, the united territorial community where you live?",% Among all respondents

More than half of the surveyed residents of the Ascension Territorial Community believe that there are places in their community that they avoid or do not recommend visiting their relatives and children to avoid becoming a victim of crime (55.0%, of whom: 28.9% said “yes ", And 26.1% - the answer is" rather than not "). Instead, one in four respondents said that there were no such places (15.6% - "probably not rather than so"; 9.6% - "no"), and one in five - hesitated to answer (Fig. 5). 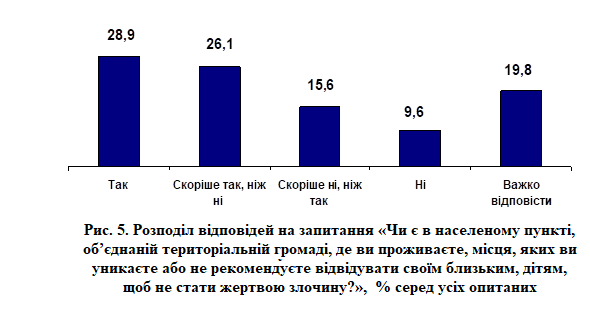 Almost every second respondent acknowledged that in order to combat crime in the locality or territorial community where the respondent lives, it is necessary to fight drug trafficking (61.5%), corruption and bribery (57.3%), illegal trade and alcohol use ( 50.5%), as well as to protect property and housing of citizens from theft (46.8%), to counteract hooliganism and vandalism (46.8%) and to prevent juvenile delinquency (46.3%).

In addition, the issue of combating environmental pollutants (43.6%) and ensuring road safety (40.4%) is very acute. All of the above can be facilitated by qualified police officers, as noted by 39.9% of respondents from the Voznesensk territorial community (Fig. 6). 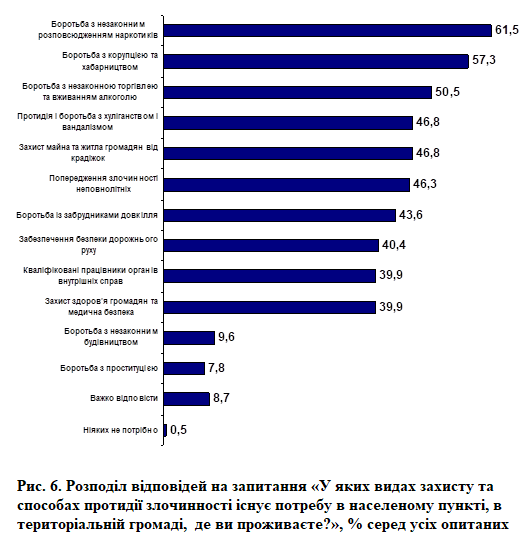 According to the respondents, the least mentioned ways to fight crime are the fight against illegal construction and the fight against prostitution (Fig. 11), which indicates the absence of this problem in the community.

A comparison of the responses of young people aged 14-34 and the population aged 35 and older shows that the primary way to combat crime, according to young people, is to combat trafficking and alcohol consumption (64.7% vs. 46.1% among older respondents). .

The project was supported by the results of the competition of projects "School of Community Funds" in the framework of financing the Grant Agreement between the Fund Ch.S. MOTTA and the NGO "Initiative Center for Promotion of Activity and Development of Public Initiative" Unity ".