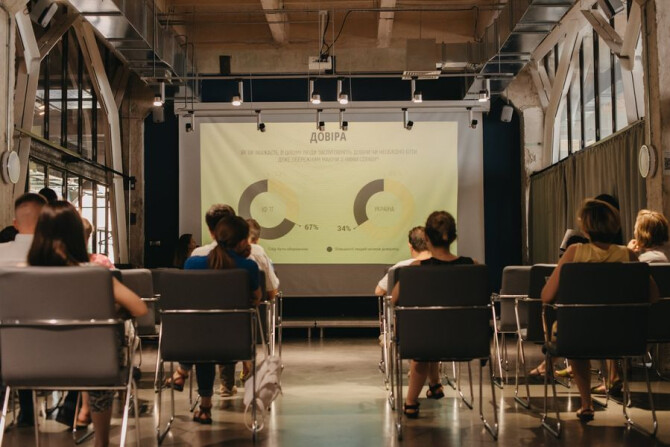 Ivano-Frankivsk presented the results of a study of the social climate in Ivano-Frankivsk TG, which was conducted in April-May 2021 by the research agency Fama - Custom Research Agency in partnership with the platform "Warm City".

400 Frankivsk residents were interviewed, and data related to indicators of proactivity, social perspective and trust in the community were collected and analyzed. The information was presented by Mariana Malachivska-Danchak, CEO of Fama Research Agency. The study of the social climate in Ivano-Frankivsk TG shows:

92% of Frankivsk residents are proud to be residents of Ivano-Frankivsk, and 81% consider themselves happy people;

88% are satisfied with their life in Ivano-Frankivsk;

81% are satisfied with the opportunities for free religion,

78% are satisfied with opportunities for family life,

73% are satisfied with the opportunities for education and free expression of national identity.

Among the important but unsatisfied opportunities are the conditions for professional realization and doing business.

The general commitment to the city is also reflected in other indicators: less than 8% of respondents declare their desire to move from Ivano-Frankivsk, and a third of respondents are non-natives of Frankivsk.

According to self-esteem, 81% of Frankivsk residents are happy people. The feeling of happiness is inversely proportional to age: the older the people of Frankivsk, the smaller the share of the happy.

According to the results of the study, most Frankivsk residents believe that the way their lives are, depends more on them than on external circumstances, which indicates a sense of personal responsibility. At the same time, Frankivsk residents are characterized by inertia.

The index of environmental responsibility is 3.26 (out of 5 possible), the index of activity - 2.72 (out of a maximum of 10). But this is not a manifestation of unconditional passivity, 83% say they have carried out at least one of the proposed environmental practices in the last 12 months. The top 3 eco-practices of Frankivsk residents include: sorting of household waste (67%), reducing the use of plastic and plastic products (40%) and regular use of reusable shopping bags by Frankivsk residents.

The family monthly income of the vast majority (41%) of Frankivsk residents is from 10 to 20 thousand UAH, 9% declared that this amount exceeds 20 thousand UAH, all others (44%) accumulate less than 10 thousand family income per month. At the same time, 60% of respondents work. A significant part of the family budget 40% of residents spend on food [100% choose this category of expenses], a fifth of income goes to pay for utilities [among 98% who chose this category], 15% of income is spent on rent [rent housing 14%]. The share of costs for treatment and purchase of clothing is 10% for both categories [82% and 81% were chosen, respectively].